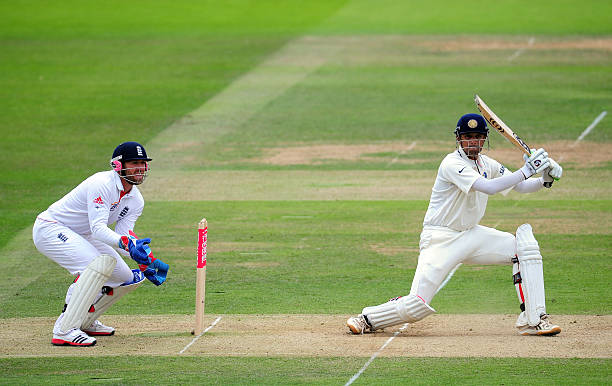 Over his illustrious career, which spanned over one and half decade, Rahul Dravid played plenty of match-winning and saving knocks. Here is our tribute to the legend on his birthday.

Rahul Dravid was the mainstay of the Indians batting lineup and the little master in test cricket. The pair holds the record of most century stands by any pair in the game’s longer format. Dravid, popularly known as The Wall, had a wonderful start to his Test career, scoring 95 against England at Lords. And he never looked back.

Here we have compiled “The Wall Masterclass”. His top five test innings of all time are listed below in chronological order.

India had lost the top order and were without the service of young Laxman, who was retired hurt. His stand of 145 with Sourav helped India to put on a respectable total in the first innings. He cut, pulled, drove for almost nine hours against the Proteas pace quartet and registered gracious 148 runs. He continued his good run in the second innings and set the opponents for a challenging target of 356 runs. The innings saved India from whitewash’s blemishes, and Rahul Dravid was awarded the Man of the Match for his stupendous effort.

The famous Oval test was Tendulkar’s 100th test. On the backdrop of Michael Vaughan’s 195 runs, England put on a monumental score of 515 on the board. Dravid was going through a purple patch with hundreds in both the previous innings, and he continued nudging singles with occasional fours for ten and half hours before being run out for 217. The innings showcased the pure class and temperament of a test batsman. It helped India to draw the four-match series 1-1.

The Adelaide magic was a perfect example of the Indian team’s dependence on Rahul Dravid in overseas conditions. Indian team tottered at 85 for the loss of four wickets, and a defeat seems inevitable. Once again, the famous duo of Eden test came to rescue and put on match-winning 303 runs for the fifth wicket. They became the second pair after Bradman and Ponsford put on two 300 plus stands in test cricket. Dravid gave respect to good balls and scored heavily on poor balls. His drives were absolutely aesthetic.

Some other statistical highlights of the innings was that Dravid scored 233 and 72 runs, and India won by 233 runs. This remains the highest such score in test cricket. Ricky Ponting’s 242 in the first innings, on the other hand, is the highest individual score in a losing cause, whereas the Australian team’s 556 is the joint second-highest all-out score in defeat.

The series was hung at 1-1, and both teams were keen to win the Rawalpindi test and take away the series. But Mr. Dependable had some other thoughts. He played the longest ever test innings by an Indian in terms of balls faced and minutes batted. The innings’ other statistical highlights were that his 270 remains the highest away score by an Indian while batting second. The artistic display of batting complemented by superb bowling helped India to win the historical series. This was a special time in Indian cricket history that they have won both the Test and ODI series in a single tour.

This match’s performances can easily be rated as one of the finest performances by an Indian batsman. Test cricket is not about tall scores, but how one adjusts in different situations and plays accordingly. Indian lineup was blown away by the pace and bounce of Taylor except Dravid, who batted for 340 minutes to score 81 runs and put some on the boards for bowlers to bowl. The bowlers bundled out the home team for 103 and took a vital 97 runs’ lead. Now it was the batsmen’s turn to set up a challenging total, but once again, half the team was in the pavilion with only 76 runs on board. And once again, the skipper played a match-turning knock of 68 runs and added valuable 88 runs with the tail. India won the match by 49 runs. It was 35 years since India won a test series in West Indies.

Here are some of his other great knocks that somehow failed to cut or were overshadowed by better batting performances.

Which is your most favorite Rahul Dravid innings? Let us know in the comments below.